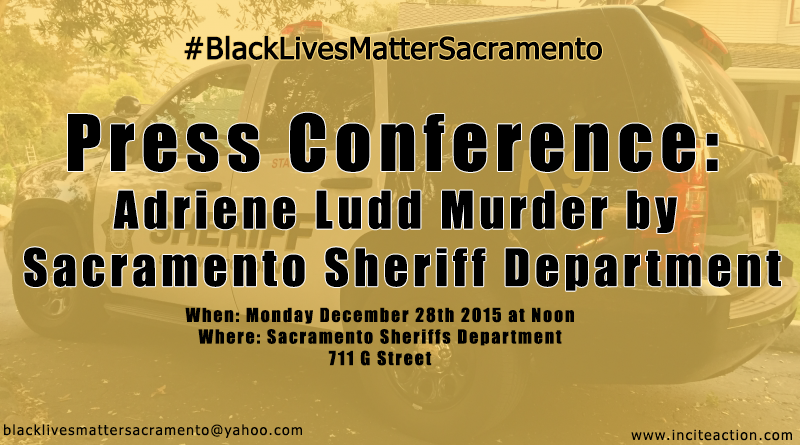 Adriene Ludd was a 36-year-old Black man killed by Sacramento County Sheriff Deputies Benjamin Green, David McEntire, and Troy Mohler on October 22nd 2015. Originally, Sheriff Scott Jones told the media that Adriene got out of his vehicle shooting at police, so they were forced to kill him. Nearby workers who had witnessed the incident told media outlets the exact story given by the Sheriffs after speaking with Sheriff Jones initially at the scene.

After it was discovered that all bullets fired came from the Deputies’ guns, the Sheriff's department confirmed this new information with the media and claimed that Adriene’s gun must have "jammed." Therefore, unlike original statements by the Sheriffs or witnesses, there was no "shoot out."

This change of story highlighted a pattern of inconsistency from the Sheriffs. Another inconsistency that was reported to the media was that Adriene traveled all the way around his vehicle to gain access to a weapon that was not working, while he purportedly had a working handgun in his pants pocket. Additionally, at the crime scene, deputies did not employ proper protocol when managing Adriene's body, which was left out uncovered for over 11 hours, before being brought to the coroner.

Since the shooting and despite their own efforts, the family of Adriene Ludd has not obtained a police report, an autopsy report, or the existing dash cam footage of the three police vehicles that were at the scene.

The dash cam footage would not only clear up inconsistences for the public, but also ensure an equitable investigation process that holds all parties accountable. Therefore, in November, Black Lives Matter Sacramento submitted a list of demands to the Sacramento Sheriff County Department and Sheriff Jones:

I.We need the Sacramento County Sheriff Department to give the Ludd family access to:

II.            Adoption of dash cameras and body cameras for every Sheriff Deputy. The body cameras should be required to be on, and footage should be public record with a simple process for procurement.

III.            The new Inspector General, Rick Braziel, must to conduct a complete, timely and honest investigation into the murder of Adriene Ludd.

IV. We need the Sacramento County Sheriff and Sacramento Police Departments to fully expedite the implementation of AB 953 (The Racial & Identity Profiling Act 2015). The public must know the timeline for implementation and how exactly it will be implemented.

In light of national high profile examples of police corruption and cover up of unjustified murders of citizens, the need to clear up the inconsistencies in Adriene’s death with video footage is even more urgent. From these national cases, we have learned the lengths that police departments are willing to go to in order to cover up unlawful use of force, and we have learned that these departments only acknowledge their crimes when the community demands it.

These incidents make very clear that right here in Sacramento we must be very critical of the lynching of Adrienne Ludd. If the Sheriff’s department has acted with moral impunity in this case, there should be no hesitation to show police dash cam footage of the shooting. Yet despite the Sheriff having the legal authority to choose to release the footage, he refuses. Additionally, Sheriff Jones has claimed that departmental policy prevents him from releasing the police report, which is also untrue.

In Sheriff Jones’s response to our demand to be kept informed of the ongoing development of his plan for implementing AB953, rather than seizing the opportunity to demonstrate good faith and a desire to build positive community relations, Sheriff Jones was dismissive. He stated that his department has until April 2019 – over three years from now – to provide a report on their plans.

As residents of this community, we are committed to seeking justice for Adriene and the Ludd Family, but justice first starts with transparency. As aforementioned, there have been many inconsistencies; the Sacramento County Sheriffs Department has yet to meet our demands, all of which simply ask for evidence and the facts to clear up the inconsistences.

As it is our duty to fight for our freedom and rights, Black Lives Matter Sacramento is committed to seeing that this investigation is undertaken thoroughly and completed in a timely fashion. We will continue to hold the Sacramento County Sherriffs accountable for their responsibilities and duties as law enforcement. If Sheriff Scott Jones truly believes in fostering good community relations and working amicably with community members, the investigation and evidence should be disclosed promptly.

For more information about Adriene’s case or Black Lives Matter Sacramento, please visit us at www.inciteaction.com, on Twitter as @blmsacramento, or on Facebook at facebook.com/blacklivesmattersac.